As I wrote about in an earlier post, I built a website this summer about desk setups called mydesktour.com. That post was mainly about the idea, but I want to go more in details about how I built the site.

These are the biggest really dumb decisions that I made along the way, and a few good ones.

(In order of magnitude)

I actually did some research before I began building. I found similar communities/sites like r/battlestations, Desk Hunt, mysetup.co, and kit.co.

However, I don’t think it was nearly enough. Browsing through and lurking these sites, I wasn’t researching the right things.

While I was just looking at the type of engagement numbers (# of likes, # of views, funding $, etc.), I should have been looking for signs of users wanting more than the existing platform provided.

Classic case of researching just to confirm existing beliefs, rather than to actually learn something.

I need to stick to first principles more going forward.

(more of my thoughts on #nocode here)

Mistake #2: Building something I wouldn’t use

I was not overly-excited about the space or the community that I was building for.

Instead, I was excited about building the application, the solution.

Major red flag. And as with all insidious red flags (especially in relationships), you don’t realize them until you experience their nasty effects and reflect on their root cause.

Everyone talks about product-market fit, but you also need product-market-founder fit. As in, you’ve got to live and breathe the problem-space if you want to maintain the energy to toughen out the inevitable dip.

Loving your solution isn’t sufficient (and might not even be necessary it seems).

Self-explanatory. Not only was I just averse to designing, but I think that I was taking the “agile” idea to the extreme.

But I think it’s a case of taking a good principle too far.

Designing and wire-framing would have saved me many iterations. Especially as it would’ve forced me to think about the user more. It’s surprisingly easy to get lost in the code and forget about user experience.

Mistake #4: Not load-testing or being prepared to scale

When my HN post hit the front page, it got bombarded with thousands of hits, which crashed my server because my MongoDB free tier could only hold 500 connections at a time.

This is of course a good problem to have, but a problem still.

Since this horrific incident, I’ve found a way to get $1000 in MongoDB Atlas credits by using my five rice.edu email accounts to get $200 credits each.

Next launch, I’ll be sure to keep an eye on any free tier quotas.

When building iteratively, you need to relentlessly prioritize.

I watched a YC video about good practices to plan tasks sprint-by-sprint.

He gives a lot of amazing tips, but the best concrete tips were: 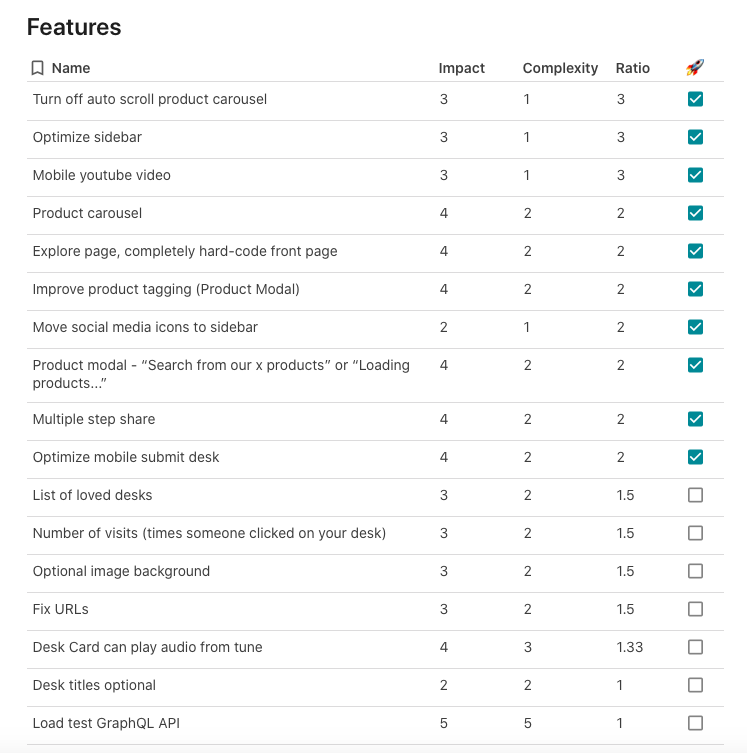 Why is this so effective?

Because it’s so easy to get distracted by shiny new features that might have a terrible difficulty/impact ratio (eg high difficulty, with low impact).

I’ll definitely use this method for future projects.

Good decision #2: Getting out of my comfort zone

Specifically with talking to users, marketing, and thinking about distribution.

Ryan Hoover advises people to do “shitty work”. Mostly this just means stuff outside of your craft. For developers, that’s doing stuff like sales, speaking to customers, doing marketing, etc.

In my case, I could have easily just built out the website and not worried about getting eyeballs on it like the rest of my projects.

But instead, I spoke to Reddit users, posted on HN, posted on IH, and told friends about the project.

I began a Twitter account, a newsletter, and other auxiliary features that really help foster high fidelity feedback.

Feedback is everything, and the entire goal of building an MVP. And the only way you get feedback is if you actually spend time and effort on distribution.

“If you build it, they will come” is one hell of a fallacy.

Good decision #3: Not worrying about branding too much

Logo/color scheme/typography.. Shouldn’t have to spend much time with these.

I almost got into a time sink by posting on Dribbble looking for design help, but thank god I thought better.

I reached out to many of the aforementioned sites already in the space, Desk Hunt and mysetup.co. I expressed that I enjoyed browsing through their sites and found it inspirational. And in return, these people were very friendly and gave tips on how to get started on the right path.

Reaching out to people who have done similar things can be extremely helpful, even if your products might seem like “competitors”. And if you approach it as a friend/fan, they most likely will treat you with similar friendliness.